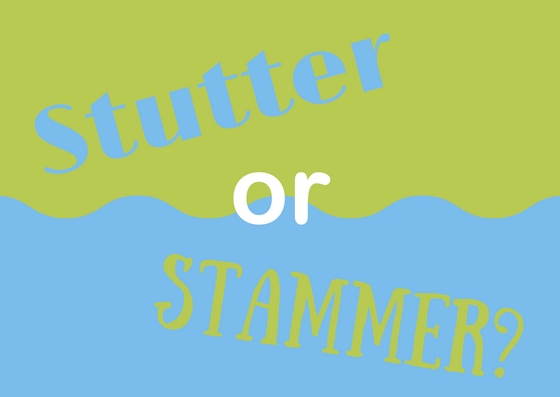 Very occasionally, we have people asking us what the distinction is between stammering and stuttering. It’s an understandable question, and with the two words floating around it’s difficult to tell which is the right one to use.

We’re here to set the record straight, once and for all.

There is no difference – sort of.

A quick Google search will give you a number of answers, with many people claiming that a stutter is the repetition of letters, whereas a stammer is the blocking and prolongations. There are others who say it is a clinical distinction used by professionals, and there are some who claim that a stutter is something you are born with and a stammer is something you develop due to trauma or nerves.

The reason that both stutter and stammer exist and describe the same speech dysfluency is because stammer is a mostly British term, whereas stutter is largely used in the US, as well as New Zealand and Australia.

A great explanation of this is by Lynne Murphy, a linguist who writes the blog ‘Separated by a Common Language’. Lynne has used her extensive knowledge of linguistics, as well as some fantastic Googling to find how the terms are used and when, and more importantly where. Her conclusion is:

“If it is the case that stammering and stuttering are different things, then it looks like in the 1960s, they found a cure for stammering in America, and somehow that accidentally brought on more stuttering. Of course that’s not what happened. What happened is that stutter took over in [American English] as the usual term.”

This is a great explanation of the phenomenon, and puts the case to rest.

There are only 2 ways in which stutter and stammer are different:

If you’re interested in more interesting facts about stuttering, head to our FAQ page and have all your questions answered!

Get help with your stutter

2 thoughts on “Stuttering vs stammering – what’s the difference?”